The president of IWCs District 95 Egypt & Jordan Mrs. Dina Gharib and Honorary Secretary Mrs. Azza Al-Mufti paid a visit to Inner Wheel Club of Sphinx. The meeting was attended by a large number the club members and it was an atmosphere full of love and friendship. The club president, Mrs. Abeer Ezzat, talked about this year project 2018/2019 and what was accomplished in the first half of Inner Wheel year. The projects are a clothing exhibition for Arabic Music Institute students and donating for a corneal transplant operation to children, which the club has been working on for six years.

The IWCs District 95 Egypt & Jordon president spoke about this year projects that concerns women and girls and she talked about her suggestion on conducting seminars about problems such as domestic violence, female genital mutilation, etc. She also made some observations and explained some of the articles of Inner Wheel Constitution. 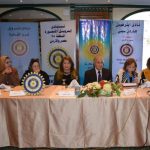 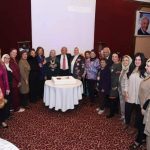