The General Assembly celebration & the handing over ceremony

On Saturday, June 26, 2021, in a joyous atmosphere, the General Assembly celebrated the end of the Inner Wheel year 2020/2021 and attended the handing over ceremony.

The event started with the playing of the national anthems of Egypt and Jordan. The National Representative Iman El Bashari gave the opening speech she thanked all her colleagues in the district committee, IWC Presidents and members. She also congratulated the incoming Chairman and her distinguished committee wishing them a successful year.

Mrs. Mona Aref, the outgoing District Chairman, began her speech by welcoming everyone, and these are parts from her speech:

“LEAD THE CHANGE” was not a slogan, but a goal. With conviction, the intention was sincere, and thanks to God and to your support the wheel of activities revolved in all of you and is still spinning to this last day of the IW year. Indeed, this was a unique and special year. You traveled to villages and hamlets implementing projects with a clear vision to build the human being, develop his capabilities, and give him hope to live the decent life that he deserves. I would like to inform you of the outcome of the projects that were implemented thanks to the efforts all the district IW clubs that have exceeded all expectations: EGP 17,650,000 is surprising, isn’t it?! All that amount was raised in the midst of the difficult circumstances of the Corona pandemic… From all my heart I thank every one of you and I wish to congratulate you all for your continuous effort throughout this year in all fields. I also thank all the members of my esteemed district committee and all the members of the district in the different clubs for this unique year a success, and wish the best to the incoming chairman, Mrs. Hala Hagras, and her committee.”

welcoming all the participants and congratulating the District Chairman for her successful efforts throughout the year. She highlighted next year’s slogan and a number of key points, and

A documentary film was shown highlighting all the activities that took place over the past year. It earned the admiration of the audience. Subsequently, the members of the district committee gave their speeches. The treasurer, Mayada Tokan, presented last year’s budget and the members voted to approve some of the submitted proposals.

Finally, in an atmosphere of true friendship and amidst the congratulations of all attendees, the outgoing District Chairman, Mrs.Mona Aref, presented the incoming Chairman, Hala Hagras, with the presidential necklace. With a touch that signifies deep appreciation, the outgoing District Chairman distributed certificates of appreciation and gifts to the active IW members. 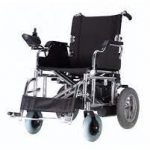 IWC of Damanhur donation of 4 Wheelchairs

IWC of Al Mansoura presenting books to the library of the youth canter of Tamai El Zahayra. 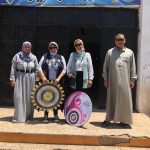