The Electrical disorders of the brain. A lecture given to members of IWC of Nasr City

The Inner Wheel Club of Nasr City, headed by Mrs. Mona Al-Saeed, hosted on Saturday the 19th of September Dr. Engy El-Sawy and Dr. Mohamed Idris consultants of neurology at Al-Qasr Al-Aini hospital, to give a lecture about “The electrical disorder of the brain” which is a disease known as “Epilepsy”.
Decision has been made by Inner Wheel club of Nasr city members to financially support, through donations, the treatment unit of this disease and consider it as its main project for this year (Mega project)..at Kasr El Aini hospital
And another main reason for choosing this project was to change the society’s view point about it and the legacies and shambles that accompany it, stressing on the fact that it is an organic and curable disease that can, with proper medical care and the necessary medicine, and by dealing with the patient with more understanding, we can with all those factors control the disease and help the patient recover and return to his normal state. This attitude goes with this year’s slogan “Lead the Change”. This disease met with a high turnout not only for its adoption as a project, but also to the contribution to changing society’s view of it …
Among the most important points that were emphasized during the lecture are: all
1- A full explanation from the two doctors of the disease, its seizures, convulsions associated with seizures, and first aid to the patient during convulsion.
2. How to diagnose the disease and how to prevent it.
3. The patient can marry and have children while following the doctor’s instructions.
4- A sick mother can breastfeed her child while taking the necessary precautions.
5- This disease is not hereditary.
6- The patient can lead a normal life by perseverance on treatment, following a special diet, being free from stress, abstaining from smoking and staying up late.

At the end of the lecture, many misconceptions about this disease changed in the minds of the attendees.
It is worth noting that the medical supervision of this disease, the operations that the patient may need, medicines and radiation, all of this is based on the donations of charitable people and that the treatment period may extend for a period of three or four years.
And what aroused the strong sympathy of the club members was the humanitarian tone that the two doctors spoke and the feelings of dedication to serving the patients. 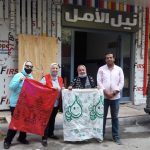 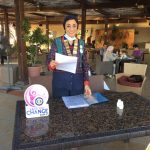