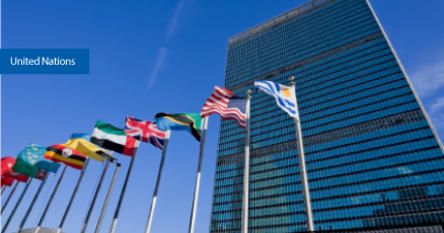 REPRESENTATIVES AT THE UN

The representatives of Inner Wheel at the UN are coordinated every year by the current International Vice President.
The original suggestion that IIW should apply to the United Nations for consultative status came in 1970 from a Board Members for the Philippines, Mrs Legarda.Two years later, the ECOSOC ( Economic and Social Council of the United Nations) confirmed the admittance of Inner Wheel on the Roster of Organisation section.
Thanks to the availability of some members the representation and the presence of IW became a real possibility.
During the 9th Convention in Sydney-Australia in 1993, had been approved the following General Motion, International Inner Wheel must confine its involvment with the United Nations ( e.g. ECOSOC and UNICEF ) to being an Observer on the Roster with a consultative status.
The representatives follow and assist the work sessions of the commissions regarding important themes as : Human Rights, Rights of the Children, conditions of Woman, the family, the Elderly and Drugs and report to the International Vice President on the activities of the Committees and Conferences; they are our link with UNO, and in turn must report to UNO on what we do in Inner Wheel; copies of the annual reports of the National Representatives are sent to our representatives at UN, to keep them informed about the work of our members.
For many years now Inner Wheel has emphasised the importance of the major UN themes and has promoted their sensitisation and implementation.
We currently have 4 IW members accredited at the United Nation Offices in Geneva, Vienna and New York who are:
Geneva: Genevieve Torriani
Vienna: Ceja Gregor Hu and Ulrike Nemling
New York: Martine Gayon