On the occasion of the celebration of childhood holidays and also the celebration of the International Day of Diabetics for Children. the Innerwheel Club of Nasr City, headed by Mrs. Mona Al-Saeed and some members of the club organized an
educational day for the nursing staff at the Pediatric Diabetes Unit at the Children’s Hospital, Ain Shams University, in cooperation with Dr. Iman Munir, head of the unit.
The title of the lecture was: “Nursing Care for Diabetics”
The lecture was given by a number of volunteer university professors.
The club members were received by Dr. Mona Al-Ganzouri, Head of the Children’s Department at Ain Shams Hospital.
At the end of the day, the nurses were given honorary certificates in appreciation of the superior care they exerted in a very professional and updated manner for the children of this disease. The club delivered certificates of appreciation to the participating doctors in the educational day, and meals were distributed and a sum of money was donated to support the nurses and another sum of money to support the unit’s needs.
At the end of the day some comic books were donated to the children of the clinic to watch & read. 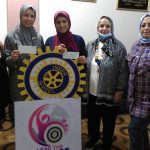 IWC of Tanta at Al Wafaa Orphanage for Girls 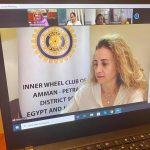