The Inner Wheel club of Amman Petra, headed by Mrs. Seneen Baghdadi Chehabi, in the presence of the Vice Chairman of District 95 Egypt and Jordan Mrs. Nahla Qubain, held a cultural meeting over Zoom where they hosted the creative Egyptian novelist Hisham El-Kheshen from Cairo.
The discussion shed light on El Kheshen’s creative experience in the field of writing novels and short stories.
The participants introduced their valuable analyses about El Kheshen’s novel “Happened in Berlin”, which was among the best-selling books in Egypt in 2018,and was chosen to be read in The German School in Cairo as part of the Arabic language curriculum.
It was an extremely informative and enjoyable event that was moderated by Mrs. Mona Hamzeh Abu Ragheb, who also thanked the honorable guest Hisham El Kheshen, as well as the president of Inner Wheel Club of Amman- Petra Mrs. Chehabi and all the participants of the meeting.
Mrs. Abu Ragheb also thanked the Club Committee for organizing this distinguished meeting.
All proceeds from the meeting will go to charitable works. 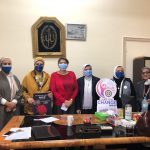 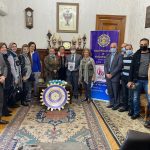