On Saturday, 6 April 2019, she received in her home in Oman Mrs. Jumana Mutawea, former President of the Amman Club, members of the Suadiye Club in Istanbul and their spouses from Rotarians.

A protocol with this club was implemented in 2010 when Ms. Jumana Mutawea was a national delegate and Mrs. Abeer Dajani was the club’s president that year. 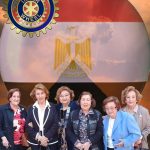 Orphan's Day at the Tree Club 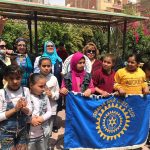