The ceremony was wonderful and full of love, fun, and enjoyment, which confirmed the friendship of the members and their support for the club project. 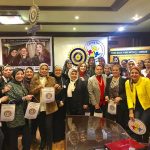 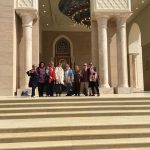