End of The inner Wheel year

On June 12, 2019, in the presence of the National Delegate of the Region, Egypt and Jordan Mrs. Lili Al Aswad, Mrs. Annayat Bishara, the club’s development manager, and Mrs. Samia Aboul Fotouh, Past Iman Abdel Latif, Saloui Zaki, Hanan Sabri, Sanaa Eid, and members of Enerwell Zamalek Club, including Sali Al Nqadi, Hasnaa Riad, Moni Eo Al-Zahab, Nelly Al-Melawani, Houria Fahim, Hadi Wali, Manal Allam, Hana El Hadary, Omaima El Naggar and Rabab Abdel Mawti and a large number of distinguished guests and 9 members of the club Inner Wheel Nile headed by Amina Nassar and Magda Fahmy was handed over to the President for the new year 2019-2020 to Mrs. Samia Abul-Fotouh President and the new board represented by Mian Raslan MP, and all former President and Salwa Clever Organization and Iman Abdel Latif Amina Fund and Amani Saeed Honorary Secretary. The President has shown a film showing the achievements of the club last year, including charity activities, meetings, cultural and entertainment activities, trips and exchange visits between Inner Wheel Zamalek and other clubs and participate in meetings of the region and the day of the Inner Wheel World. And then the celebration “Yala Nghani” in a fun atmosphere of love and affection and familiarity and members singing karaoke on a set of songs for pre-arranged Karaoke videos with the distribution of lyrics to the audience and Tony played on the song and the singers attended the audience and every year and everyone is fine.
Responsive WordPress Carousel Slider
5 Likes 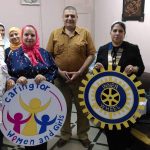