Under the slogan of this year, “Pink First”

the first preliminary meeting of the Inner Wheel clubs took place for D 95 Egypt and Jordan for the year 2021-2022 in the presence of the Executive Comittee members of D95 .

*Mrs. Hala Hagras The Chairman of D 95 Egypt and Jordan

*And Mrs.Faten Hosny the webmaster of D95.

In addition to the past national representatives past presidents ,presidents, secretaries and treasurers of the Inner wheel Clubs.

The meeting was held in an atmosphere full of joy and happiness and taking all precautionary measures.

Mrs.Hala Hagras Chairman of D95, started the meeting with words of welcome to its distinguished council members and all attendees, and congratulated everyone on the start of the activities of the Iw year 2021-2022, wishing everyone success.

She asked everyone to stand a minute of silence for the soul of Mrs. Laila Abu El-Ela, the first founder of the Inner wheel Club in Egypt. (Cairo Club)

This was followed by the speech of the national representative, Mrs. Iman El-Bashari.

Mrs. Iman El Bashari NR D95 welcomed executive board members and all attendees. She elaborated on the presidential and social themes of 2021/2022, and the objectives of this year’s IIWP Ebe Martines. She announced that Dr Laila El Aswad will not be nominated next year for International board member, and that Mrs Ashnadelle Hilmy Mortagy will be nominated with the consent of all executive board committee. Mrs Iman also mentioned that District 95 will be celebrating its golden jubilee next December, and details of celebration will be announced in due time.

The Chairman of D95 , Mrs.Hala Hagras, spoke and thanked everyone for their precious confidence in her election as the Chairman of District 95 for the year 21/22, and her wishes that she would meet everyone’s expectations. She invited all clubs to support the struggling clubs.

In a wonderful touch, she presented her committee members with a souvenir gifts, which consisted of wooden shell box full of chocolate pieces wrapped in the iw logo for this year *Women first *

Wishing that the Iw year be crowned with successes and achievements.

The words of the members of the Executive committees continued and delivered final words .

The successful meeting, by all measures, resulted in the satisfaction of everyone.

The General Assembly celebration & the handin... 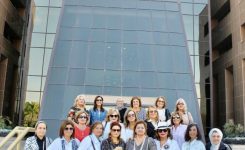 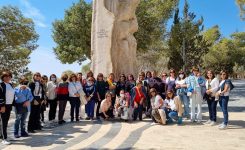 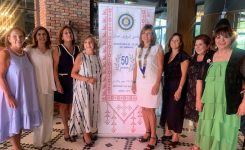